David Hughes is a man very much after my own heart, he has written two volumes here that chronicle the stories that never got told about the movies that, for the most part, didn’t get made.  They are never anything less than an engrossing read.  A few years ago I stumbled across a copy of the original edition of The Greatest Sci-Fi Movies Never Made in Hillsborough public library and once I started reading I was totally engrossed.  For years I’ve been on and off researching the story behind one of my favourite films and I saw in Hughes’ book something I’ve always wanted to produce, the story behind the making of, or in his case the story of the nearly making of.

In Tales from Development Hell Hughes uncovers the stories behind the development process that sees millions of dollars spent on films that are never made.  Where brilliant ideas are tossed aside in favour of something more familiar or safer and scripts are re-written in order to please 8 different people before you sign a star, and they demand a re-write.  If you ever find yourself in the situation where you are sat watching a film and wondering ‘how or why did any group of humans come to think that it was a good idea to do that?’ then this book goes a long way to offering answers to those questions.  Chapters range from the aborted Total Recall sequel to  the lengthy gestation of Indiana Jones IV (the script was ready in 1995!) and even including the near miss of the various attempts to adapt Neil Gaiman’s Sandman. Hughes’ research is thorough and is fortunately garnished by the experiences and insights of world class script writers like Steven de Souza and Gary Goldman.  One drawback about a book like this is that it makes you pine to see some of these films, these unproduced masterpieces.  One such is the Sly Stallone vehicle ISOBAR, described as being a bit like Alien on a futuristic train. To be directed by Ridley Scott with Joel Silver producing at the height of his late 90s powers and with production design by Scandinavian nightmare merchant HR Geiger it sounded like a strange but heady brew that could be potentially brilliant.  But it all fell through, as it so often does.

Hughes’ revised and expanded version of The Greatest Sci-Fi Movies Never Made addresses one of the key problems encountered since the original edition was published, some of the films got made!  Inevitably the stories of their tortured development continue the fine tradition of backstabbing, re-writing, lying and always throwing money at a problem until it goes away established in the earlier edition.  Included as extra are chapters on the aborted attempt to make a film adaptation of The Outer Limits and the outrageous sounding 1930s development of an oil painting animation of John Carter of Mars.  I’ve found a video online of the test animations done for John Carter of Mars, which I’ve stuck on the end of this entry.

I’m basically green with envy over David Hughes, he’s written books I’d like to have written but he’s done it much better than I ever could.  For movie fans these are great reads with mysterious characters, hateful villains and some fairly put-upon writers at the core. Read ‘em, and inside you’ll have a little cry for all the dreams that the factory manages to mangle.

Back when I reviewed The Departed a couple of people asked about the rat symbolism that I mentioned. Here’s a little YouTube video that sums up the symbolism quite neatly. Though, be warned, it’s basically one big spoiler…

Because I’ve got your best interests at heart I thought I’d show you this cracking trailer. I realise you may have some serious giant robot fatigue right now, what with the mega budgeted disappointments that were Terminator Salvation and Transformers: Revenge of the Fallen, but hang in there. I’ve been tracking Neill Blomkamp’s first feature for a while and I think that it has got some serious potential. Blomkamp was attached to the Peter Jackson produced Halo video game adaptation which fell through, this is his way of dealing with that disappointment. The premise is a little like Alien Nation but with the setting of South Africa there is the potential for a whole other level of intrigue in the portrayal the race relation subtext. I’ll let you be the judge of how it looks…

I absolutely loved the initial promo trailer for Give ’em Hell, Malone (see it here). I reckon it was the best trailer I’d seen in a long while. Well, the more conventional Cannes trailer is out and the film is still up there on my radar. The soundtrack just gets better with the addition of Johnny Cash’s cover of the Soundgarden classic Rusty Cage. The dames look hot, the whisky looks cold and the fightin’, car crashin’ and deformed bad-guy count appears to be in order.
Here’s the new trailer for your viewing pleasure… 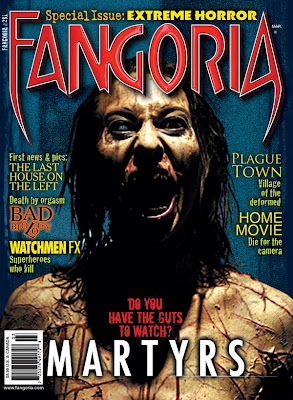 I prepared for my recent holiday by purchasing some reading material. One item of which was a copy of legendary horror magazine Fangoria, my first purchase of the gore-hounds favourite publication and unfortunately, at five English pounds, probably the last. Price aside, as a horror fan I’ve always fancied a read so it seemed as good an opportunity as any. The days of the magazine may not be numbered but there is change in the air for folks in print/publishing. Margins are getting tight and the internet is eating readers left and right. I wonder if specialist publications like the affectionately named ‘Fango’ might survive or have to change. But one quick flick through the magazine reveals two crucial things.

1. These folks really do take their horror quite seriously, whilst they touch on big budget films with an aspect of horror (Alex Proyas’ Knowing in this iss.) the meat of the magazine is straight up, knock down, drag out horror. Whilst the quality of the copy varies the quality of the information is strong. These writers know their stuff and when they review they do so with a huge weight of knowledge and insight into the methods of production, especially the difficulties associated with low budget film-making. There is a lot of attention given to the minutiae of production design and (as you’d expect) make-up and effects.

2. Fangoria isn’t just a magazine, it’s a radio show, a series of conventions and a fairly hefty internet presence in its own right. It’s managing to cover the bases pretty well.

Whilst I’d advise that you don’t read with your lunch due to the explicit pictures this is truly the finest publication for horror-fans. Any worries about an American-centric slant are assuaged by the positive coverage given to the current crop of French horror films. A cracking read undone by paying the import price of 5 quid.

I quite enjoyed Sacha Baron Cohen’s Borat: Cultural Learnings of America for Make Benefit Glorious Nation of Kazakhstan so I was excited to hear about the new international Red Band trailer for Brüno. It looks like it might deliver the same sort of humour but with an added sense of style and a whole heap of homophobic hilarity. I laughed like a drain at this trailer and I hope that the film keeps up the steady stream of gags because Borat didn’t quite manage to maintain the same high level of humour. If the full length release is anywhere near as funny then we’re in for a treat…

I’ve decided that I quite fancy sharing some of the really cool stuff to do with films that occasionally pops up and piques my interest. This is the first of these posts and you can use the comments to tell me whether or not you’re interested in any of the things I put up.  Most of the news/trailers and other bits that I find comes via the excellent film website http://www.slashfilm.com/, which I can heartily recommend.

Anyways – first little piece of goodness is the excellent looking trailer for the soon to arrive Give ’em Hell, Malone (Russell Mulcahy, 2009). From this trailer I’m really looking forward to the film and I’m sure some of you will too.