The end of the summer seemed to mark a return to quality. Or it would have done if Warner hadn’t released the teenage marketing machine that was Suicide Squad. A film that so desperately wished it was zany, wacky and edgy that it genuinely made me cringe with its pandering. It used a collection of extraordinarily on-the-nose pop/rock songs pumped over a neon imitation Banksy with the clinging awkwardness of your dad dancing with you at your 18th Birthday.  All of that bravado, all of the cloying, screeching ache for attention couldn’t distract from a completely run-of-the-mill storyline so dull that it gave up roughly halfway through.

None of that would matter if the individuals in the film were any good though. So whilst Will Smith behaves like Will Smith, admirably and Margot Robbie seems to be enjoying herself (in the worst and most destructive depiction of love in recent memory) there is the clanging pale bollock of an elephant in the room that is Jared Leto giving us the single worst interpretation of a character since John Wayne played Genghis Can’t in The Conqueror. It is no exaggeration to think that this might be the most cringeworthy performance I’ve ever seen. And I watched The Jazz Singer. Leto stinks up the screen in a way that made me flinch. Physically flinch. And not because of any inherent creepiness or fear, but because you can see that he really means it. He really thinks this is his moment to fly into folklore like the performances before him. But no. It’s absolutely awful. Jared Leto may think sending weird gifts to his co-stars is method acting his way to a form of madness. It isn’t, it’s annoying and so is he.

Ignoring that bollocks, of the films I missed and am really looking forward to Laika studio’s Kubo and the Two Strings which reviewed astonishingly well and once again failed to set the box office alight (we don’t deserve nice things). Everything I’ve heard from everyone who has seen the film is sensational but unfortunately despite the presence of a couple of talking animals the perceived darkness of the story appears to have turned people off. Idiots.

Elsewhere in the month Paramount’s glossy $100m gamble on remaking Ben-Hur went crashing to the floor, failing to even take its budget back globally. Two of the least liked men in Hollywood (Miles Teller/Jonah Hill) made a film where they played a pair of entitled chancers who profit off the misery of others in War Dogs. So, not a stretch then? Disney somehow made Pete’s Dragon for $65m and thus continued their incredible run of profitability – how long ago must John Carter seem now? Statham did his thing again some more in Mechanic: Resurrection – how far has that guy come since Lock, Stock eh? And Jonah Hill and Seth Rogan made a film revolving around the single joke that food is alive.

Finally, there are two films to talk about that deserve a bit more space and the two are weirdly connected. Poverty and the death of traditional American capitalism provide the backdrop for both the home invasion thriller Don’t Breathe and modern heist western Hell or High Water.

Firstly, Don’t Breathe is a solidly made, taut thriller that leverages a simple concept and talented direction to create an escalating nightmare scenario. Until about two thirds of the way in when, spoiler free, it goes nasty, very nasty. Set against the economic deprivation and social desert of modern Detroit the film will make you sympathise with the home invaders for a change and so otherwise normal, if not decent, people are tramelled into committing acts that would ordinarily seem beyond the pale. So far, so run of the mill. Films like this are solid and dependable for a studio, often released via their smaller distribution wings – in this case Sony/Screen Gems. But that’s when things get odd. Made on a comparably minuscule $9.9m budget, weighing in at a lean 88 minutes and having a hard ‘R’ rating in the states would seem to stack the odds against the film in the crowded summer market. But it opened at number one in the box office with a sterling $26m and went on to $150+ worldwide. It is examples like this and The Shallows that break through the monotony of the superhero and the space franchise to show audiences can handle something with a little more edge to it. 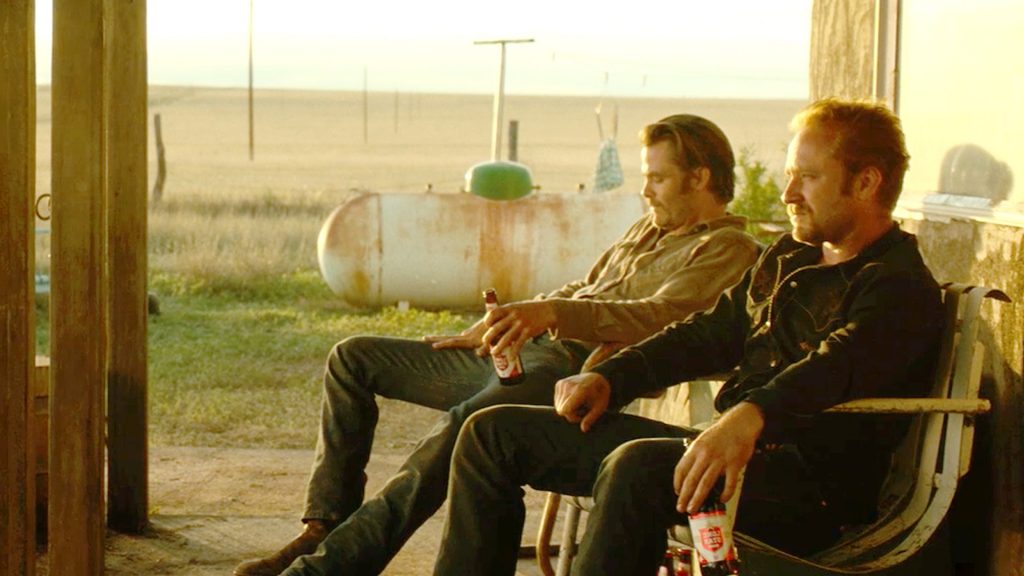 But as much as I liked Don’t Breathe for its economy and style, it wasn’t the best film of the month – Hell or High Water is the kind of thing we should have made on a slightly more regular basis. Once again, against the backdrop of economic collapse, only this time in Texas, a reasonably normal person is pushed to criminal activity. This time he robs banks and, to add a little frisson of excitement, Chris Pine’s Toby takes his faintly psychopathic brother Tanner (the always excellent Ben Foster). The pair are robbing very specific banks for very specific (as in ‘too important to spoil’) reasons. This is rustbelt Texas, dusty towns, dusty vehicles and, more often than not, dusty people. Echoes of the frontier past reverberate through the film, a past of cattle drives and cowboys, of Southern hospitality and booming investment. All of which is oxidising in the dry heat, slowly strangled by suited sharks stealing the very land from under the feet of the people. It very well may be my actual film of the year. But for now, it’s one of my FILMs) OF THE YEAR. And not just for Chris Pine’s beeeeeautiful eyes.