It appears that I watched two films that came out in September.  I had positive feelings about the pair of them but before all that – what happened in the post summer malaise where serious films for serious people start to get wheeled out?

Worthy films with decent reviews include things like Clint Eastwood’s Sully and Oliver Stone’s Snowden whilst a look at the rest of the releases is a bit like a reminder for half forgotten memories of films I never really fancied watching that much. Tim Burton made his film again and managed to spout some borderline racist nonsense when asked about diversity, proving that everyone we ever liked from the past risks being exposed as a shithead eventually. Mark Wahlberg made a film about the brave boys on the Deepwater Horizon. Sort of proving that whenever Americans are involved in a procedure to fuck up the world, be it war or destroying the natural world in some catastrophic fashion, they’ll come back later and make a film about how hard it was for their brave boys. So ruddy, bloody brave.

Kevin Smith released a film too. Yoga Hosers. Me and Kev fell out a long time ago. Back around the time when I started to understand films and he made Dogma. An appalling wasted opportunity. Yoga Hosers looked awful.

I did watch The Magnificent Seven because I love Westerns and I loved the original films. This version is interestingly diverse, Denzel gets to be a badass, Ethan Hawke gets to be the Robert Vaughan coward, the absurdly cool Byung-hun Lee gets to reprise the James Coburn knife thrower role, Vincent D’Onofrio gets to use his weirdest squeaky croak accent and Chris Pratt is, for the first time, a vaguely dislikable character. That doesn’t really sit well with Pratt. He is, by all accounts, an extraordinarily cool person to be around. His role here, as a hard drinking, untrustworthy chancer is just an ill fit on the usually loveable boy. But the film hangs together nicely enough. Overall, it’s fine. Just sort of fine. Denzel is cool as fuck, obviously. 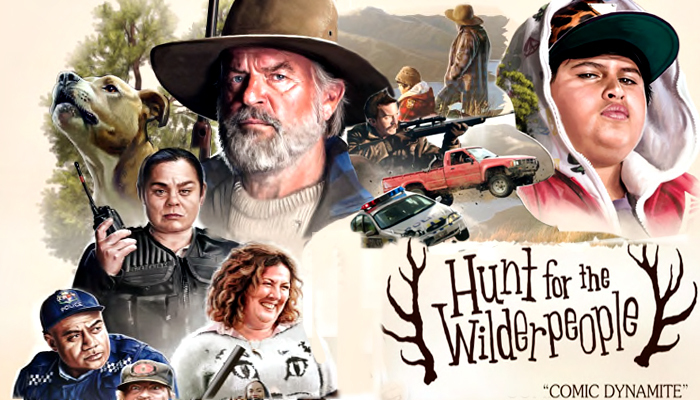 But mine, and almost everyone else’s, choice as one of my FILM(s) OF THE YEAR is Hunt for the Wilderpeople. The unlikely double act of the arch-grump Hec (played by Sam Neill) and his troublesome foster son Ricky go on the run in the wilds of New Zealand. Sparking a national manhunt, the pair become notorious and the film becomes special. I wasn’t taken with Taika Waititi’s previous film What We Do In The Shadows, finding it far too hip to be genuinely funny and I never really got on with much of his other stuff either – having similar problems with Flight of the Conchords. But this is a much more steady piece of film-making, despite the appearance of the singularly unfunny Rhys Darby in an ill-advised and completely unnecessary cameo.

***Interlude – I know lots of people I like and respect think Darby is great. But comedy is subjective and I subjectively think he is not funny – as much as I want to think it, I just don’t laugh. And his stand-up DVD was dismal.***

Yet all of this is swept away by the central drive of the film. A simple story in which two people who need each other to survive find that out through the difficulties they encounter in the world. It’s hardly rocket science but it works bloody well in this film.

I’ve looked at the release schedules. I barely watched anything at all. I know that Moonlight got all the buzz that everyone expected to go to Nate Parker’s Birth of a Nation (but it turns out he’s a terrible person and blew his moment). Allied, Hacksaw Ridge and Nocturnal Animals joined the list of worthy things I’ll get around to at some point. Manchester by the Sea was partially lost amidst claims of Casey Affleck being a pathetic human, Passengers apparently emboldened rape culture with its busted depiction of love and La La Land isn’t in the UK until January but I loved the trailer.

I only really watched Rogue One and it was good. How lucky we are that these films are solid and decent. The Force Awakens was a similarly solid film. Neither of them do anything particularly special, they just do it with a bit more style than the rest of the films out there. The most obvious case is the final action scene of Rogue One. It bears more than a little similarity to the final action scene from another space sequel from earlier in the year, Star Trek: Beyond. Yet the Star Wars film manages to do a far better job of just establishing where everything is and how it is all connected. The Star Trek film is confusing series of CGI skylines jetting past at sickening angles. It’s just better film-making. Better use of film-language. The kind of thing you’d assume someone in charge of making a film would understand.

Remember, it was only about 15 years ago that we sat and watched a series of creatively inert films featuring racial stereotypes, insubstantial action and a plots with all the human warmth and knuckle whitening velocity of an accounting spreadsheet. And people claimed they were good. They weren’t good. In simple terms they were, and remain, bad films. So scarred are we, so mentally distraught by the process of lying to ourselves about these canonical catastrophes that we might jump to say that the latest batch of Star Wars films are something transcendent. I don’t think they are. But I do think they’re bloody good films, and for a Christmas tradition with my kids, watching good films is a hell of a lot better than watching bad films.

So cheers, I’ll gladly take that Disney. Also, please keep putting women in kick-ass roles as the heroes of films so that the pissy man-babies on the internet keep spitting their dummies out; so that the women in the cinema get to see themselves in the role of the hero the way men have always been able to; so that young girls get to aspire to be the leader of the rebellion/resistance/squad/whatever and not just to marry one; so that my daughter, at six months old, has a well of costume options where she gets to be cool, independent and badass rather than being limited to a princess or a fairy; so that toy manufacturers finally make female action figures without having to have the internet remind them to do so; so that my boys/all boys watching these films might start regarding women/girls as their equals rather than inferior/weaker/attainable prizes. Cheers.