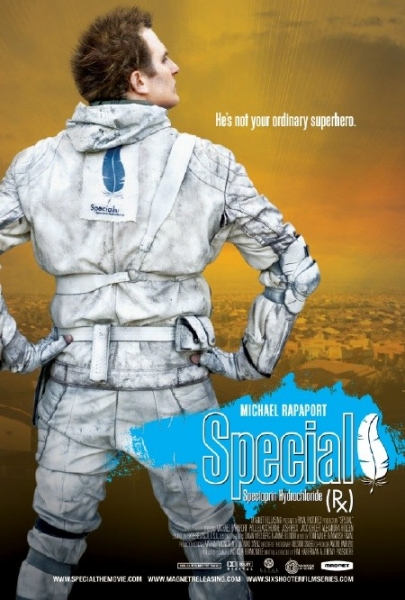 Rarely do I sit down to watch a film knowing nothing about it but this was one such case. And what a pleasant event it turned out to be. Michael Rapaport is Les Franken, a lonely parking attendant who reads comics and still harbours childhood dreams of being able to fly just like a superhero. He signs up for a medical trial of a new drug, ‘Special’. The drug is designed to eradicate your self-doubt, to give you more confidence. Les responds to the drug with a bit more vigour than expected, he believes he has the superpowers he always wanted and he quits his job in order to help the citizenry. This brings him to the attention of the owners of the drug company, hoping for a corporate buy-out the last thing they want to see is a fellow wearing a silvery-white leather suit rugby tackling innocent people whilst sporting their company logo. I was reminded of Half Nelson in the way that Special was filmed, languid and gentle. It cements Les’ loneliness, his distance from other human contact when the world he lives in doesn’t react to his behaviour – he’s invisible. He’s exhorted to repeat that he is special by his employer, whilst expected to behave normally in a life that is anything but special. Michael Rapaport is astounding in this film, his big sad features convey his child-like excitement at his supposed powers and his subsequent confusion and fear when the world doesn’t react how he expects. It isn’t often that I’ve cared quite as much about a character. His interaction with a shop assistant Maggie, played by Alexandra Holden, who he saved from an armed robbery is a beautiful and touching piece of acting but also a clever juxtaposition. Maggie has a problem (no spoilers – promise) which is caused, in a simplification, by her self-doubt. The scene plays out beautifully as two awkward, and apparently, lonely people connect and find some form of unspoken common ground. Special is indeed that.