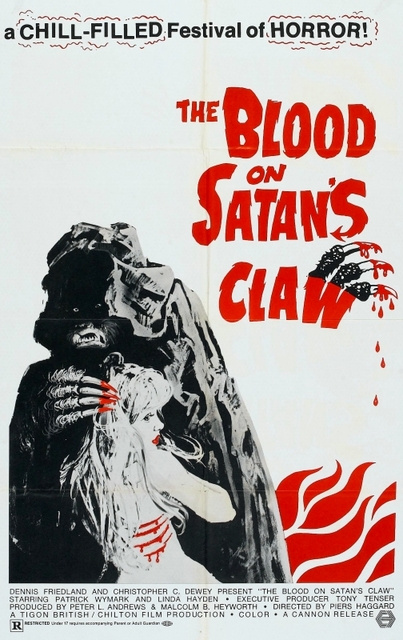 I’ve become a bit obsessed with ‘folk horror’ recently, especially since I wrote about it in my recent post. So I thought I might watch and review some of it, looking specifically to dig out the signifiers of folk horror (flowers, masks, blood rituals etc) and look at some of the crucial themes of the genre like the religious frictions, the use of ruins and ancient stones as places of worship/sacrifice and an obsession with the land. I’ll be doing some reviews of the main films in the movement as well as some of the TV stuff too.

So, Piers Haggard’s Blood on Satan’s Claw – watched on the advice of Mark Gatiss – is the last of the big three folk horror films that I hadn’t seen (I’ll revisit the others to do smaller reviews). 17th Century rural England, somewhere about the home counties, a young farmer turns something up with his plough. It’s remains, neither human nor animal. His discovery predicates some very strange goings on in the village as Satan himself, or ‘the fiend’ as they call him, walks among them corrupting the young, especially the girls. What’s he up to? Why, rebuilding himself from the skin of the children of course. It’s a labour intensive practise that involves a bit of ritualised blind man’s buff, a pinch of rape and some bloody big scissors.

This is resolutely folk horror, no hint of anything else in there really, Witchfinder General has something of the revenge thriller and The Wicker Man is a detective story (at least to begin with). No, Blood… is quite pure in its crystallisation of the sub-genre and for my money a bloody good film too. That is if, and this is quite a big if for some people, you can look past the creature effects. Nothing dates a film quite as much as dodgy creature effects and the dark lord looks, sadly, fairly dated now. But that shit don’t bother me none whatsoever, no sir. Because I was loving the whole feeling, the primal simplicity of the whole thing – stripping the British countryside back to something dangerous, fearful and full of fertile promise.  The film is brimming with a kind of raw and rural sexuality and it successfully taps into the vein exposed by Hammer for lacing horror with a bit of nudity.

So what makes it folk horror? Well let’s start with the obvious parts, the setting (time and place) and the characters strike a familiar chord. The country was a god-fearing place in the 17th Century but superstition of devils and demons still held sway, especially in rural areas.  As with almost any British film you get a lovely broad swathe of the class system involved too. It should be noted that being poor means you are much more likely to be killed, possessed or enchanted into becoming a follower/acolyte. Perhaps it’s because we’re much more likely to believe poor people are stupid or inherently evil. Certainly the first person to be affected has already been maligned for being ‘a farmer’s daughter’ yet when the noble chap she was betrothed to encounters the same force he is capable of lopping off his demonically possessed hand, Evil Dead style. So whilst the teens from the village are hell-bent on serving the dark master it falls to the ‘Judge’ to bring the Lord’s vengeance over from London.

Here’s where I try and list the things that make something a bit ‘folk horror’.