Way back in the mists of time, August 2005 to be precise, I went to the local multiplex to catch a couple of films. An odd pair they were with very little in common between them, until I started to think about them a bit more.  Recently I have been rolling the two films over in my head and trying to make some sense of the similarities and differences I could see and what they might mean, if anything.

What are these two films? First up there is The Dukes of Hazzard directed by Jay Chandresekhar. This is a major studio update of the 70s/80s TV show with the curious topline cast of Johnny Knoxville, Sean William Scott and Jessica Simpson. They are a bizarre little family unit (brothers/sister) made up of professional prankster, a gross-out comedy star and a pop star. The Duke’s (Luke, Bo and Daisy respectively) set about protecting their hometown way of life down in the deep south from some renegade authority figures (Boss Hog and Sherriff Rosco P. Coltrane) who notionally have the law on their side and are intending to strip mine the county. It matters little that their way of life is trading in illegal moonshine as a way of earning money. Why? Because them’s some ‘Good Ol’ Boys! They do most of this inside a classic all-american muscle car which they occasionally race. Lovely. 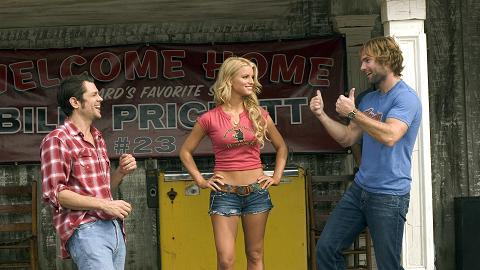 The other film is Rob Zombie’s horror sequel The Devil’s Rejects. This is a LGF (Lions Gate Films) release and a sequel to his earlier, larger budget, haunted house film House of 1000 Corpses with a cast of relative unknowns. The Firefly family is made up of micro budget character actor Sid Haig as the unconventional father figure Captain Spaulding, cult hero Bill Moseley is unhinged brother Otis and rock’n’roll fashion designer Sherri Moon Zombie is Baby. The family is on the run after the law have torn their house apart in the opening scenes. On the run from people who, in essence, don’t agree with their way of life though that way of life does involve breaking the law in fairly extreme ways. Torture, murder, gun-rape and occasionally making someone wear their boyfriend’s face as a mask. They are on the run from the renegade arm of the law, Sherriff John Quincy Wydell, in a classic soft-top American Cadillac. Delightful. 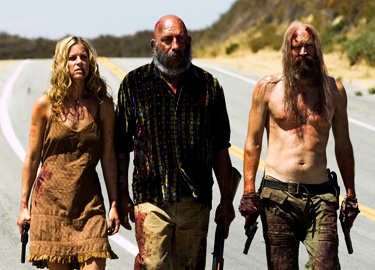 Whilst one cribs from a much loved television show which soft-focused the criminal elements of the family and played up the comedy anarchic aspects of the loveable rogues the other lifts from the dark underbelly of the South on screen. Zombie takes his cues from 70s exploitation cinema and drags them through the road movie prism. One offers safe thrills and spills where the villains are comically inept and the heroes are cheeky scamps with zany madcap plans. The other ventures into deeper, darker waters where it forces you to watch the family unit do some terrible things before they themselves are subjected to some pretty extreme violence – forcing you to feel sympathy for them, forcing you onside with the murderers and psychos.

So there are a few surface similarities, so what? Well I think it is interesting that two radically different portrayals of Southern stereotypes are on offer. The South is fertile ground for Hollywood and Rich Hall made a marvellous documentary about this very subject. It’s a playground of near lawlessness, sweat, sex and violence in the eyes of film-makers.  But it also offers a window to something that seems, to me at least, to be a little primal in American cultural memory. The South seems like the kind of place where the law can’t tell you how to live your life, placing your film there is like wrapping your characters in a cloak of rebel chic. Here is a place where authority is impinging on that most important of American ideas, freedom. Sure, in the case of the Firefly clan, that might be the freedom to torture and kill people and for the Duke’s the right to brew and distribute liver obliterating moonshine. But come on, they were just getting creative in their own special ways, trying to grab a slice of that American dream, or face in Otis’ case. 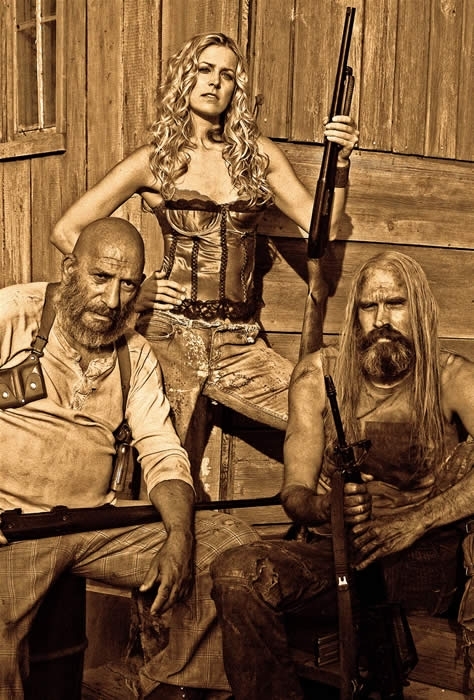 But the South has a difficult history, a history bound in chains and forced to work, a history at odds with the concept of freedom for all. So how do you manage to appease any watching liberals? Make sure your characters are ignorant of any such past. Witness Luke and Bo driving into central Atlanta in the General Lee, replete with confederate flag, when they are abused by people accusing them of being ‘late for your Klan meeting’. They don’t understand the reference or, more importantly, the inference. Brilliant, innocence through ignorance. Very smart. It’s a cheap little screenwriting trick, dumb down your characters, stupid people aren’t offensive – they’re funny! Race relations aren’t a factor in The Devil’s Rejects though. The film is, essentially, colourblind in that respect. Rob Zombie’s South does have black and Hispanic people in it, it’s just not a facet of their character. Critics might point out that Ken Foree is playing a pimp and Danny Trejo a hired killer but that puts them relatively high up the social respectability ladder in the film. 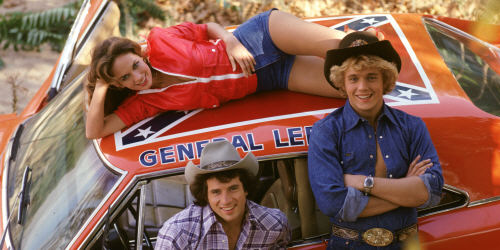 The Devil’s Rejects is an exceptional film, the making of documentary (longer than the film itself) is a focused and deep investigation of the process of making the film on a relative shoestring and with a ridiculous time limit. Like the film it is documenting it is an excavation, prepared to turf up the dirt and peer into the mire. By contrast The Dukes of Hazzard has some out-takes over the credits where Joe Don Baker makes a joke about Jessica Simpson’s tits and Sean William Scott stifles a laugh. Y’know, sexism but sorta safe, cos they jus’ some good ol’ boys…