A couple of weeks ago I stayed with a friend of inestimable hospitality (@MGElliott) in the picturesque spa town (City, apparently) of Bath. He asked if I minded watching The Proposition, a film I reviewed on here some time ago.  We sat down alongside Matt’s equally generous girlfriend Kim (@nanosounds) to settle into the sweat soaked Australian outback, peopled with all manner of parched violent degenerates and desperate ex-pats (how little has changed).  It was whilst watching that I was struck by the use of fencing in the film (shut up), and the way I’d seen fences and land demarcation used in other Australian cinema before. You see, land and land ownership is a terrifically important and evocative subject in Australian life, it is in danger of becoming the very thing that defines them as a people. If you fancy finding out why then have a read up on the Mabo case and you might want to understand what ‘terra nullius’ means too. 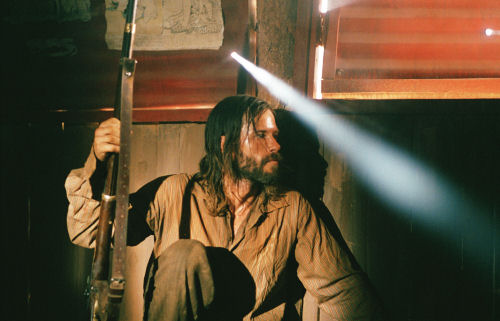 Fences then, what do fences really mean in cinema? In the case of most classical interpretations they denote ownership in one format or another. In the case of our Western view of the world a fence is an effective way of marking territory, showing what is ours in a very physical and demonstrable way. We know that by crossing a fence we are entering someone’s land, we are stepping onto their territory, either at their invitation or not it’s pretty important stuff. Were I American I might interpret someone crossing that threshold uninvited as an opportunity to fill you with lead for impinging on my freedoms. Well, why are these fences so important in Australia? And why in The Proposition? Ray Winstone’s grizzled and distraught Captain Stanley is the key.

Captain Stanley continually re-iterates his desire to ‘civilise’ the land he has found himself in, this barren and inhospitable terrain we now call Australia. How does he do this? Well first of all he wants to round up all the criminals and cleanse the land of their infection. Stanley makes the classic interpretation of the land, it is a void – a void rapidly filling with undesirable elements that he is a barrier against and he is the spearhead of a civilising force attempting to tame the wild land and the wild folk who tread upon it. But the core of Stanley’s character is his home, a place we are told that he rarely visits and one that is surrounded by a fence. A rudimentary fence granted but one that is there, almost pointlessly given the lack of other houses. Stanley’s house stands alone in the landscape, the fence almost looks like it isn’t there to keep people out but to keep the rest of the landscape out. In parts the fence even looks like a white picket job, the most evocative of all civilising forces. The white picket fence embodies the desire for suburban, civilised and, most importantly, normal Western life. 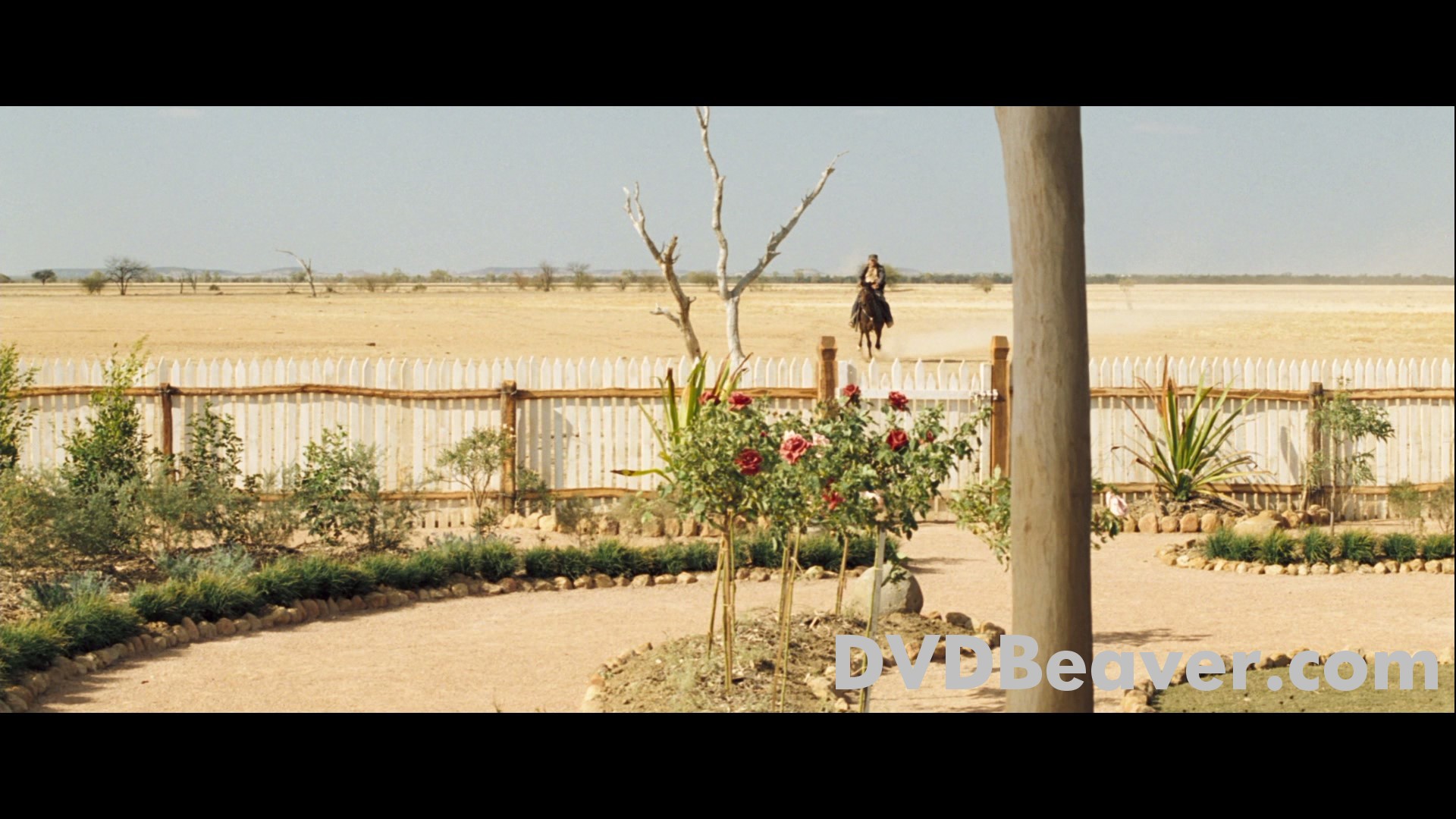 Inside the fence is Stanley’s wife and a house and garden that appears to have been plucked out of middle England and placed inside a dust bowl. No one else is around for miles, just the desert and the dust. Stanley is civilising the land, one parcel at a time and it starts with his house, filled with bone china, doilies and all the upper middle class chintz you could ask for. Even Emily Watson, as Stanley’s long-suffering wife Martha, is a porcelain relic of the homeland. Her white skin and delicate manners stand at odds with every other character in the film, Stanley’s desire to protect her innocence is obvious and, given who he works with, understandable. When she braves the town to see her husband she resembles a delicate piece of pristine Lladro thrown into a particularly dusty and decrepit pawn shop by mistake.

This is the Australian conundrum in microcosm. Here is this land, originally populated by people who did not entertain the notion of owning the earth they walked on. The earth is always going to be there, they are not. When you put it into that context what a ludicrous thought it is that we can ever really ‘own’ land. You are merely its temporary visitors. Brief custodians of the dust. So how does The Proposition show us this? Stanley is sick, he has been overwhelmed by the task at hand, the vastness of the country and the seeming futility of his civilising mission.  In the final scenes Danny Huston’s violent philosophising Arthur Burns invades Stanley’s home during Christmas dinner. Arthur has gone off the deep end. He’s been overwhelmed by the land and eventually seems to want to adopt the objective morality of the dust, he cares little for others, he knows no empathy – he is the latest in a long line of Aussie cinema psychopaths all snarl and pseudo intellectual charm leaving shattered bodies in their wake (see also The Boys, Wake in Fright, The Plumber, Mad Max, Chopper, Romper Stomper – I could go on). He appears in the room without warning, as if he rises out of the dust and goes in for a good rape and pillage. Stanley is helpless, paralysed as he has been for most of the film caught between a desire to fill the abyss and its inescapable gaze back into his soul. Martha is taken, she’s also frozen stuck in an alien land all the defences are shredded when the men enter the room. You can build a civilisation on it, but the land is still there and your petty fences mean nothing to it. Look at the picture below, where the aboriginal servant employed by Stanley has left to go home for the evening he leaves his shoes inside the fence, understanding that this parcel of civilisation is just that – a parcel. The rest of the country is as it has been for centuries and there’s never been a need for excesses like shoes before.

So what of the fence? After Arthur is shot by his brother in the Stanley house he stumbles outside and barrels through the fence. It offers no protection, Arthur has given himself over to the dust and simply doesn’t see the fence as a meaningful object. It is an object of Western-ness that doesn’t belong on this land. It doesn’t belong because the land can’t be owned, it owns people. It fries Stanley as he attempts to yoke it and subsumes Arthur when he gives in to it. The land wins here, you can’t own it, but it can destroy you. It is surely some form of terrible irony that in The Proposition the land truly is Terra Nullius, it is an aggressive un-owned land that rejects ownership and annihilates those who choose to defy it.

But what about other fences in Aussie films? The most famous is probably the titular cross country edifice in Philip Noyce’s Rabbit Proof Fence, another futile attempt to divide the outback married to a story about the futility of trying to maintain a perfect racial divide. How about Mad Max 2: The Road Warrior? The final desperate attempts to cling to the oil that greases the wheels of civilisation in a refinery ringed by an armoured barrier cobbled from the relics of society, with a bus for a door. The land has endured and civilisation has fallen. Chaos is hammering at the fence and hope is, like oil, in short supply. I’m sure there’s more, it’s just that this was only going to be a couple of hundred words and now it’s a short essay about fences in films. Which anyone might think were a dull subject, but they’d be wrong.

1 thought on “The Proposition and Fences in Australian Film”